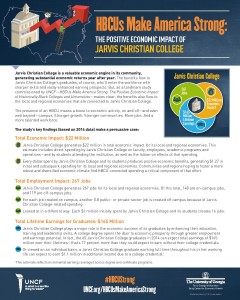 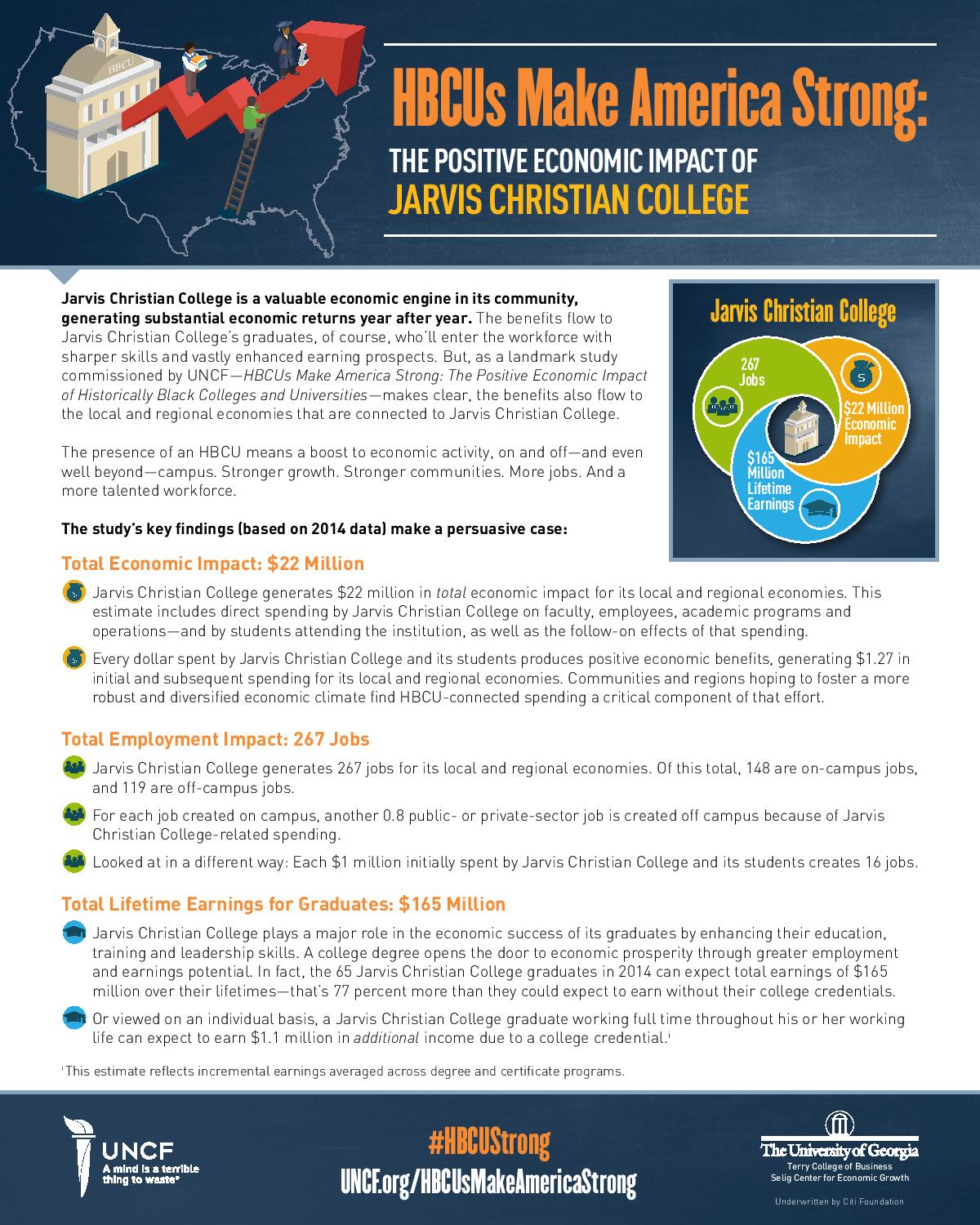 HBCUs Make America Strong: The Positive Economic Impact of Historically Black Colleges and Universities documents the significant economic contributions of Jarvis Christian College and the nation’s network of HBCUs by quantifying their impact on the economy, employment and increased earning power of their students. The study was underwritten by Citi Foundation and the economic estimates were prepared by the University of Georgia’s Selig Center for Economic Growth. Key findings of the study are below:

The presence of Jarvis Christian College in this area means a boost to the area’s economic activity, on-campus, off-campus, and well beyond the campus, contributing to stronger growth and stronger communities.

For each job created on campus, another 0.8 public- or private-sector job is created off campus because of Jarvis Christian College-related spending.

“We are excited about Jarvis and the impact we have had on the lives of our students, residents and businesses in the surrounding communities.  Although Jarvis is geographically located in a rural and serene environment, we have had a profound financial impact on the local and regional economies.  Our graduates are doing well and with the addition of courses in data analytics and cyber-security, they will be prepared to do even better,” shared Dr. Lester C. Newman, President of Jarvis Christian College.  He further stated that “Jarvis has been student-centered since 1912 and that the College will continue to be of service to our students, diligently preparing them for their chosen career pathways. This year, we have made a concerted effort to provide more incentives to our students and cutting-edge courses to better prepare them to become productive and contributing citizens, whether at home or abroad.”

“This new report changes the narrative and demonstrates that HBCUs, such as Jarvis Christian College, are feeding the community’s need for a college-educated workforce and driving economic growth,” said UNCF’s President and CEO Dr. Michael Lomax. “These institutions have led the way in developing and polishing the practices necessary to get underprepared, first-generation students ready for college, but they also help fill critical jobs with college-educated workers in the community.”

HBCUs have long been bastions of academic achievement. It is clear to see, however, that the value of Jarvis Christian College is not solely confined to educational impacts. HBCUs Make America Strong: The Positive Economic Impact of Historically Black Colleges and Universities demonstrates that Jarvis Christian College matters not only to its students, but also to the local, regional and national economies.