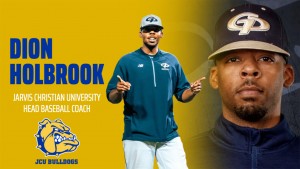 "We are excited to bring in an accomplished coach like Dion Holbrook to lead the JCU baseball program," Ladner said. "His coaching experience and experience as a student-athlete will be tremendous assets as he comes in and builds the program and develops great baseball players on and off the field here at Jarvis."

Holbrook comes to JCU after serving as an assistant baseball coach at Grace Prep Academy in Arlington, Texas. Holbrook played a pivotal role as Grace Prep was the No. 1 ranked private school in Texas during the 2020-21 season. Prior to his time at Grace Prep, Holbrook was a pitching coach at Mountain View College in Dallas.

Holbrook played college baseball at Mountain View before receiving a scholarship to play at Grambling State University. At the junior college level, Holbrook batted .327 and was named MVP for the 2011-12 season at Mountain View. In the move to NCAA Division I baseball, Holbrook was the starting outfielder for the Grambling State Tigers for two seasons. He occasionally made appearances on the mound as a relief pitcher and was later named as a starting pitcher for the Tigers. Holbrook made history at Grambling State as the first pitcher to throw a no-hitter in school history. He completed the feat as he threw a complete seven-inning, no-hitter in an 11-0 win against Prairie View A&M on April 19, 2015. The lefty faced 24 batters and struck out three. For his performance, Holbrook was named the NCAA SWAC player of the week.

In high school, Holbrook was the starting outfielder during his junior and senior years. He batted .397 his junior year and .412 his senior year as he earned 2010 and 2011 All-District honors at Timberview High School in Arlington, Texas.

In addition to his experience at Grace Prep and Mountain View, Holbrook has coached numerous youth and amateur baseball teams. He has coached USA Prime 15u and 17u, Texas Cannons 15u, Texas Giants 14u, Texas Stars 11u, and DFW Frogs 13u. Holbrook has also been involved with several showcases and camps as a leader and coach.

"First of all, I would like to thank God for this opportunity he has blessed me with," Holbrook said. "I am honored to be part of such a prestigious institution that values leadership, growth, and success. My goal is to not only put Jarvis Christian University back on the map with this beautiful game of baseball, but to also make sure these gentlemen grow into men who will achieve greatness in the future. The only thing left to say is, let's get to work."

Holbrook is a native of Arlington, Texas and a graduate of Timberview High School. He graduated from Grambling State with a bachelor's degree in criminal justice.