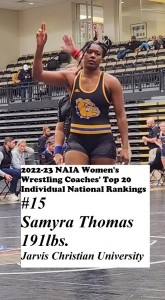 In the 2022-23 NAIA Women’s Wrestling Coaches’ Top 20 Individual National  Rankings, 191lb Samyra Thomas moved up to 15th place in the nation, up from 18th, and 170lb Natalie Bryant moved in to the rankings at 20th. The ranking was announced Thursday, December 8.

“Our women wrestlers work extremely hard to prepare each week,” said Jarvis wrestling coach Lance Brown. “We are on the verge of breaking in to the top 20 with all of our women on the team.”

Brown added that JCU received nine votes as a team toward the Team National rankings ahead of Lourdes (Ohio); Lyon (Arkansas); York (Nebraska); and Vanguard (California).

JCU Men’s & Women’s wrestling teams will be competing at Texas Wesleyan University at 6 p.m. Friday, December 9, and will travel to Wichita, Kansas, for the Friends Invitational on January 6 and 7, 2023.