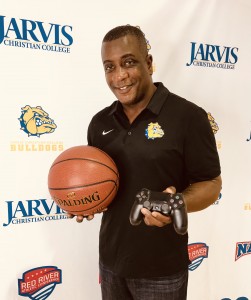 ““Two years ago, we invited Dr. Williams to bring his award-winning Esports Masterclass to Jarvis, and several of our students earned internships in the video game industry,” Newman said. “Dr. Williams has led at the intersection of innovation, sports marketing, branding, sneakers, video games, music, student athlete development and social media. We are thrilled to welcome him into the Jarvis Christian College family.”

Williams is charged with designing and launching by next fall 2022 a highly competitive, STEM-based concentration focusing on innovation, technology, sports and entertainment, as he develops a pipeline for students interested in the competitive gaming phenomenon of esports. Students will be prepared for careers in technology, sports management, augmented reality, virtual reality, video game design, marketing, communications and entrepreneurship. Also, Williams will create a life skills academy for student athletes with a commitment to academic excellence, community development, personal development and career development.

A master of networking, Williams’ LinkedIn profile ranks in the top one percent of all profiles worldwide, and his posts receive approximately 7.3 million views each month. A prominent commentator on national media outlets, Williams is a contributing opinion writer at Sports Business Journal. “Dr. Marc’s Masterclass Podcast” on the MAP Esports Network is where he shares his views and insights on sports and the esports industry.

Over the past 26 years, Williams has been widely regarded as a sports marketing pioneer, working in executive management for three of the largest sports brands in the world: Champs Sports, Footaction and Reebok. While at Champs Sports, he helped it become a $1 billion brand. He created college football’s “Champs Sports Bowl” that featured NCAA teams in the ACC & Big East with a bowl game payout of $4.25 Million for each team.

Williams’ academic career in athletics began after receiving a National Science Foundation grant to do research with legendary Hall of Fame football coach Dr. Tom Osborne of the University of Nebraska and his national championship football team, exploring career preferences and life skills.

CNN named Dr. Williams one of the top 25 Inspirational Speakers in America in 2017. This past year, he served as the Global Scholar Practitioner at Florida Memorial University, where he was selected as one of the top 25 Black Educators in Miami and was the #2 story of the year for the video game industry by Esports Observer in its annual “Top Five stories of the Year” issue.

“I am humbled, honored and excited to return to Jarvis Christian College,” Williams said.

“In September 2019, I met Jarvis Provost Glenn Lee-Pruitt at the 2019 White House Initiative on Historically Black Colleges and Universities. I was invited by former White House HBCU Executive Director Johnathan Holifield to moderate two panels on how esports could be an enrollment driver for HBCUs.

“Jarvis was the first HBCU to recognize the value of our work pertaining to creating pathways for HBCU students to work in this $200 billion dollar video game industry,” Williams said. “My newly created role gives me opportunity to develop a rigorous and innovative academic program based on technology and entertainment. In addition, I am building a sustainable athletic life skills program for student athletes to prepare them for life after sports. I am grateful to President Newman, Provost Pruitt and Athletic Director Bobby Lander for their shared commitment to excellence for Jarvis Christian College.”

As a pioneer in the sports retail industry, Williams is credited with signing the first hip hop artist—Grammy-Award-winning hip hop music legend Eve —with a sports retail apparel deal during his tenure at athletic retailer Footaction. He also negotiated the first product placement deal with a video game publisher, Activision/Blizzard, in its 2003 award-winning “Street Hoops” arcade basketball game. He co-created “The AND1 Mix Tape Tour” and was a principal negotiator on the Jay Z and 50 Cent Reebok sneaker deal for sports retailer Footlocker, Inc.

Williams also is one of the nation’s experts on student-athlete development. At Jarvis, he will create a four-year, tiered, proactive lifelong education, community outreach, violence prevention, media training, financial literacy, nutrition and mental health awareness program for student athletes. Williams has visited over 500 college campuses in his career, speaking to more than 300,000 student athletes. His award-winning “Striving for Excellence” Life Skills Academy for student athletes has been implemented at 27 NCAA Division 1 college athletic departments.

“I am excited to return to my roots of college athletics and student athlete development,” Williams said. “We will focus on critical life skills and professional development necessary to maximize their individualized brand and human potential. Education is the only thing that can transform a life, family and community. I am a living proof, and I want the same for our Jarvis students.”

Williams serves on the board of The Black Collegiate Gaming Association, is co-founder of the St. Peters University Esports and Entertainment Program, former commissioner of the first ever HBCU Esports league—the HBCU Esports Alliance—and is a proud member of Alpha Phi Alpha Fraternity, Incorporated.

Williams earned his bachelor’s degree in sociology from William Patterson University; his master’s degree in sports management and his MBA in marketing from the University of Massachusetts, Amherst; and his doctoral degree in education curriculum and leadership from West Virginia University.

•Inducted into the Hip Hop Hall of Fame in 2018

•Authored two books: “Defeating Cancer: A Holistic Approach to Living an Empowered Life” and “The Art of Networking”

Jarvis Christian College is accredited by the Southern Association of Colleges and Schools Commission on Colleges and, this year, is celebrating 110 years of educating students. Affiliated with the Christian Church (Disciples of Christ), Jarvis is among the nation’s Historically Black Colleges and Universities belonging to the United Negro College Fund that provides support to keep academic programs strong and tuitions affordable.